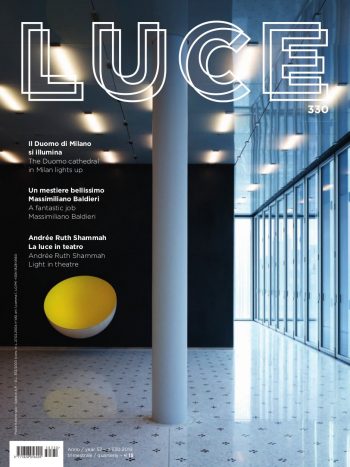 LIGHTING FOR THE HOSPITALITY INDUSTRY
by Laura Bellia, Andrea Calatroni

A new LUCE special report. Interviews with Carla Balocco, Alexander Bellman, Daniela Colli, Francesco Leccese, Marco Pollice, Michele Signorini, and Daniele Varesano, all representatives of the world of research, design, and production.
Restaurants, cafeterias, hospitals, libraries, and healthcare facilities are places in which the quality of light is fundamental for the well-being and health of guests. How is this issue addressed today and what are the benefits or difficulties in achieving lighting quality?

MASSIMILANO BALDIERI: “I HAVE A FANTASTIC JOB”
by Andrea Calatroni

A Roman and international lighting designer of great cordiality, professionalism, and experience, four of his projects have received the IES Illumination Awards of Merit from the Illuminating Engineering Society of North America. His family has been involved in lighting for over fifty years, and they were among the first in Italy to equip themselves with a photometric laboratory. He worked in New York for several years; he teaches lighting design at the IED in Rome and is a lecturer at the Sapienza University of Rome, teaching lighting design in the master of exhibition design.

LUCE: ALMOST SIXTY YEARS OF LIGHTING CULTURE, AND A SONG BY DOMENICO MODUGNO
by Silvano Oldani

In 1959, with a courage and determination seldom found nowadays, the Italian people reconstructed a territory that had recently emerged from the darkness of war and the rubble of post-war, to contribute to the economic and social revival of the nation. It was almost a Keynesian “push” shared by all, and many achievements became milestones that were admired by the rest of the world. The list is long! AIDI was born, and three years later, in 1962, LUCE. A long story…

SIXTY YEARS OF CULTURE OF LIGHT: A COMMITMENT FOR THE FUTURE
by Gian Paolo Roscio

It was 1959 when AIDI was founded. And in that decade, between the mid-1950s and mid-1960s, Italy experienced a season of economic growth, becoming one of the major industrial powers. “During this period of economic, social and cultural growth, the world of lighting also changed”, writes AIDI’s president, Gian Paolo Roscio. Sixty years have passed since that date, an important date, which AIDI celebrated with a conference and a beautiful volume with graphics by Mario Piazza and texts by various authors.

“It was October, beginning to get cold; in the village behind us the first street lamps had been lit, and the blue globe of the Hotel Concordia illuminated the deserted square with a vitreous light.” With this sence, at the beginning of her novel Voices in the Evening, Natalia Ginzburg touches the topic of light in the landscape.
The landscape that is dear to Natalia is that of the Piedmont region: “in the distance, in the evening one could distinguish the lights of Castello, and the scattered ones of Castel Piccolo, high upon the shoulder of the hill; and beyond the hill – says the author –, is the town”.

Why not write about cinema, especially when it comes to the story of Thomas Alva Edison and his inventions and the rivalry with George Westinghouse and Nikola Tesla? In Alfonso Gomez-Rejon’s movie, The Current War, as personal and family events unfold, the typical themes of modern industrial societies are addressed: competition, copyright, technology and its achievements at the service of industry, the relationship between creative genius and entrepreneur.

IN SEARCH OF THE LOST LIGHT
by Francesco Ciulli

FAre filament bulbs perhaps the bearers of ancient “flavours”, like Marcel Proust’s Madeleines? This is how the author closes the last lines of his almost Gaddian story, after a journey through rows of low houses, up to a sign: “All types of light bulbs”. A place where, behind disturbing glass ampoules suspended from the ceiling and luminous objects of questionable taste, the author finds a lost treasure of traditional light bulbs, so much sought after by collectors and owners of those iconic lamps that have made the history of Italian design.

LIGHTING DESIGNERS AND ARCHITECTS: WHY IS INVOLVEMENT MISSING?
by Erica Napoli Rottstock

At the beginning, the author addresses all of us: “Have you ever, when you enter a club or a private home, felt immediately well and welcome or, on the contrary, uncomfortable and nervous for no apparent reason? Have you ever wondered about how much light is involved in these feelings?”. These and other questions were answered in the conversation between her and lighting designer Filippo Cannata.

Today, thanks to the project designed by Ferrara Palladino Lightscape, the interiors and the exteriors of the Duomo can be admired like never before. A meticulous work, carried out in a short amount, thanks to a high level of expertise and sensitivity that comes from the experience in the field. When the technician becomes an artist, there are no absolute values and methodologies: light transforms into pure poetry and evolves instinctively, with no need for calculations but with the sole aid of the eyes, a heart, and a cultural background built over many decades.

Founded by Massimo Sacconi and Marzia Bandini in 1988, in Florence, the studio designs lighting units in collaboration with various companies that operate in the field of lighting. Very active also at an international level, in Italy, they have several important projects: the lighting of the “Piccolomini” Library and of the Duomo of Siena; the lighting design for the new Auditorium of the ENI headquarters in Rome, EUR district; the various collaborations with ANAS and ACEA.

LUCE met Iben Winther Orton, creative soul of the Danish studio Lightscapes. We asked her to tell us about her idea of lighting and her experience on the “healing light” in psychiatric hospitals, and we discovered how “good lighting makes us better people”.

For 25 years, Ghisamestieri has been producing cast-iron lighting poles. Their products, among the oldest inhabitants of our historic squares, are part of our ancient and recent memory . A foundry until the mid-eighties, in 1987 the archives of the Officine di Forlì, with its heritage of drawings and projects carried out between the end of the nineteenth century and the following decades, became its point of reference and inspiration. Thus began the restoration of the cast-iron poles of the squares and historic centres of the most beautiful and important cities of Italy. And this is their industrial history, until today.

When Thorn, a company part of the Zumtobel Group, ideated Raze, they imagined a luminaire that was ideal for revealing the character of architectural surfaces and all their details. The company was among the first players to understand the potential of Smart Lighting and sensors applied to light. Features that give lighting designers greater compositional and creative freedom. Raze can provide an emotional contribution to the poetic story imagined by the lighting designer.

In recent times, the research in the field of non-visual effects of light has produced significant results, and the importance of the corneal illuminance for lighting design purposes has gradually increased. The Technical Physics Section of the Department of Astronautics, Electrical and Energetics Engineering (DIAEE) and the Construction Management Area (AGE) of Sapienza University of Rome set up an experimental investigation in various libraries, a measurement campaign meant to evaluate the weight of the lighting and operational variables for an appropriate choice of the corneal illuminance level, in order to define an index capable of predicting the degree of visual comfort in confined spaces.

Stefano Gri and Piero Zucchi call themselves “tailor-made” architects; their works are far from definitions or from “-isms” that always try to frame something new. Their projects are made of materials that empathize with the light and the landscape, including or reflecting it. A long, fast-flowing interview, like light on marble.

The artistic history of Andrée Ruth Shammah, who directed more than one hundred theater plays, was born at the Piccolo Teatro di Milano with Giorgio Strehler and Paolo Grassi, becoming tangible with the opening of the Salone Pier Lombardo, today Teatro Franco Parenti, founded in 1973 together with other artists and intellectuals. She tells us right away, ” Light in a theatre play can make every detail precious, just as every line is precious. What interests me is for the lights to walk with the acting.” In 2019 she was appointed Chevalier de la Légion d’honneur by the President of the French Republic Emmanuel Macron.

Pirelli HangarBicocca does not miss a shot: with “….the Illuminating Gas”, the Cerith Wyn Evans’ first personal solo exhibition in Italy curated by Roberta Tenconi and Vincente Todolì that features works spanning over the last ten years, the Milanese Tate Modern confirms its winning programme made of spectacular exhibitions. Born in 1958, an eccentric Welsh with a dandy style, he grew up in the transgressive and musically active post-punk London of the late seventies; a pupil of artists John Stezaker and Peter Gidal, he made his debut in experimental cinema.

When you touch a laser’s ray with your finger from a mysterious Harp of Light, a hypnotic harmony invades and maps astral dimensions. This occurred at the Basilica di San Celso in Milan, where the artist, musician, and performer, performed his work in a highly evocative sacred space. An impressive “sculpture”, capable of altering the perception of the places in which it manifests itself and of becoming a musical instrument, thanks to sophisticated techniques. The rays appear behind the altar, emerging from the darkness and seeming to metaphorically depict an echo of the Cosmos, mysterious, following its invisible and sacred rules.

ILARIA MARELLI. WITH A FIRM STEP, BEYOND DESIGN
by Margherita Pincioni

An architect and designer, Ilaria Marelli is much more than that: she deals with art direction, but also with product design; she is a strategy consultant, but in the meantime she designs interiors and installations, working above all on ideas that are both emotional and experimental. Her training in the field took place with Giulio Cappellini, from whom she learned the taste of experimenting and, from time to time, to do something crazy. She loves light for its impalpability, but at the same time for its fundamental contribution in creating emotions.

The anastatic reprint of the complete edition of Roberto Aloi’s publication. A book that collects more than 500 models of lamps designed by great architects and produced by important companies in the sector in three decades of Italian and international lighting production. But also a book and its era, as told by Gianpiero Aloi, to whom we asked some more personal questions about his father, about him and his family.