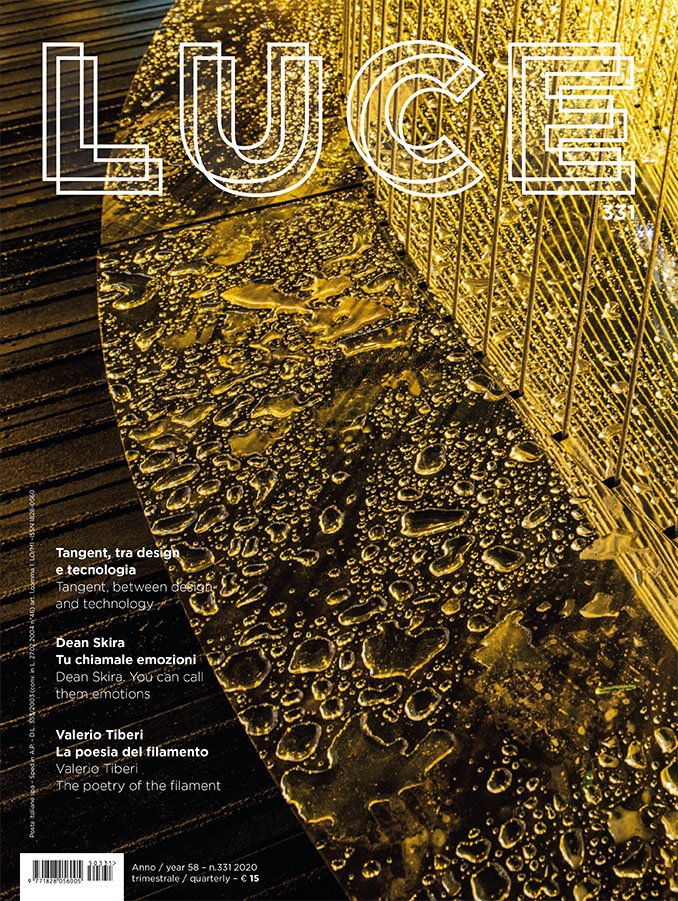 In one of the most dramatic moments in the lives of millions of people in Italy, Europe and the world, AIDI and the magazine LUCE, as a sign of solidarity, on behalf of the Italian lighting world, hope that the reading of its most recent issue may represent a significant gesture of friendship and confidence in the future.

To read and download the digital version free of charge, simply enter the following code in the coupon field of the purchase area: RBQPHFKIPM4N

How and how much do lighting services today face the differences in the relationship between old towns and suburbs, or between innovation and protection? How much are the current technologies aimed at safeguarding and enhancing the landscape? And how can they contribute to limiting the effects of light pollution and the impact on the environment? Giuseppe Gustinetti of BLLT, Antonio Ialeggio of Geolumen, Raffaele Villa of Lef Holding, Paolo Di Lecce of Reverberi Enetec and Antonio Royo of Uvax answer some questions about the problems in the current smart policies undertaken in cities

THE WILDERNESS OF LIGHT IN EMILY DICKINSON
by Empio Malara

In her voluntary isolation in her father’s homestead, where Emily Dickinson – who Eugenio Montale considered as an extreme case of a life that was written and not lived ­– buried her solitude and wrote poetry, the daily rhythm of light and darkness remains. However, night is the favourite, and the nights seduce the sensual author

Following the recent article “The lighting designer profession and the architects: why is involvement missing?”, a curious and interesting “conversation” with the lighting designer Filippo Cannata, we begin, with Gianni Forcolini and Alberto Pasetti Bombardella, the debate on this topic between the protagonists of the “lighting” art and culture

After a long period of sporadic occurrences, research on the themes of stage lighting seems to have acquired a place of its own over the past few years, even within the panorama of academic studies. This is confirmed by the first convention of international studies of Lumière Matière, held in two sessions: the first in Lille, and the second between Padua and Venice

In recent years, Smart Lighting has finally entered the design of contemporary cities as a new model of communication and urban connection. We asked what they think about it in APKAPPA to Filippo Nicolini, Sales Account, in collaboration with Cristina Zaffini, Marketing Manager, and Davide Bassetto, Product Manager

LEDMASTER ONE: WE MAKE SPORT EVEN MORE EXCITING
by Andrea Calatroni

The Ledmaster One series was born after a long process aimed at creating an advanced system of professional lighting fixtures for sports areas and large and medium-sized indoor and outdoor facilities. Without neglecting the design, Fael has developed a projector with the most up-to-date LED technology, designed in every detail

The fourth generation of Litek street lighting fixtures since the advent of LED technology, Fulgor 1, an adjustable pole-head in die-cast aluminium, is a product capable of summarizing the knowledge and experience acquired in over twelve years of activity, designed, engineered, and built totally in-house

LIGHTS IN SPORT: THE NEW LIGHTING OF THE PALAINDOOR IN ANCONA
by Monica Moro

UNDER A NEW LIGHT: THE RETROFIT PROJECT BY IREN SMART SOLUTIONS FOR THE ASM HEADQUARTERS IN VERCELLI
by Roberto Le Serre, Carlo Micono

The ASM Vercelli headquarters were renewed thanks to an important energy efficiency improvement, implemented by IREN Smart Solutions through the relamping of the offices and the thermal insulation of the façade. It was an occasion of a global restyling, which saw the lighting design project as a key element of the architectural project

FROM UP HERE THE EARTH IS BEAUTIFUL: ALBERTO PASETTI’S LUMINOUS TALE FOR THE VEGA LAUNCHER
by Stephanie Carminati

To enhance the value of the VEGA rocket launcher, exhibited outside the National Museum of Science and Technology in Milan, Alberto Pasetti has created an evocative scenography of dynamic light that takes visitors on a journey towards a deeper knowledge of the object on display, of its history and its “life”

A Wonderful Journey, a poetic and fascinating exhibition curated by Umberto Giovannini that takes shape within the historical heritage of the Miliani paper mills, thanks to the iconographic constructions of the artists Gianna Bentivenga and Maria Pina Bentivenga, the exhibition design and shadows by Anusc Castiglioni and the lights by Massimo Zanelli

THE DISCOVERY OF NERO’S SPECTACULAR SCENERY: THE DOMUS TRANSITORIA ON THE PALATINE
by Carolina De Camillis, Riccardo Fibbi

The evocative rooms belonging to the first palace of Emperor Nero have been opened to the public. An accurate lighting design allows a visual reconstruction, essential for the understanding of the spaces, today deeply transformed, and for the re-enactment of the original conditions of natural lighting

One year after the opening to the public, the lighting system was also turned on, signed by the famous lighting designers Speirs + Major. Lights and shadows alternate like the full and empty spaces of the building, in a calibrated ballet in which nothing has been left to chance

Pascal Chautard is a French designer who moved to Chile to live a new life experience in a country with a different culture and stage of development. We talked with him about the differences in lighting in different countries, and discovered that, curiously enough, Chile has as many lighting designers per inhabitant as France

YOU CAN CALL THEM EMOTIONS, IF YOU LIKE: INTERVIEW WITH DEAN SKIRA
by Francesco Ciulli

The Croatian lighting designer tells us how emotions and atmospheres created in a light-defined space are the starting point of every lighting project, whether it is architecture, public lighting, or interior lighting. A light without boundaries, which flows and should flow globally, regardless of any cultural differences

PIUARCH: PART OF THE MILANESE RENAISSANCE
by Andrea Calatroni

We met Piuarch, one of the major Milanese studios that fully participate in the new Renaissance of the Lombard metropolis, the city where it all began and that has witnessed the birth of their architectural language. Their numerous recently completed buildings and the others that are nearing completion create a series of fascinating stories to tell

D’ALESIO&SANTORO. CULTURE AND COMPLEXITY: REVIEWING THE PARADIGMS OF CORPORATE BRANDING THROUGH LIGHT
by Federica Capoduri

D’Alesio&Santoro operate in complex and varied situations; one of which is the fruitful collaboration with the Italian apparel brand C.P. Company, founded by the well-known designer Massimo Osti.  We talk about it with the designer Carlo D’Alesio, Operations Director of D’Alesio&Santoro, and Enrico Grigoletti, Marketing Director C.P. Company

TANGENT: BETWEEN TECHNOLOGY AND DESIGN, REALITY AND FANTASY
by Stephanie Carminati

With a degree in Aero-astro Engineering and a PhD at the Royal College of Art, Hideki Yoshimoto is the soul of Tangent, a London-based studio that intertwines high technology and design, in a delicate balance between reality and dreamlike dimension. Winner of the Lexus Design Award in 201, he welcomes us into his home-workshop surrounded by greenery in a residential suburb on the outskirts of London

I BELIEVE FILAMENT CAN MAKE ALL THINGS POETIC: A CONVERSATION WITH VALERIO TIBERI
by Paolo Calafiore

Born in Spoleto, the city where the Festival of the Two Worlds takes place, he is one of the few Italian lighting designers who range from prose to opera and ballet, up to the musical. For Tiberi, the challenge is always to use technology to support art, giving it a soul, without solely exploiting its technical aspect