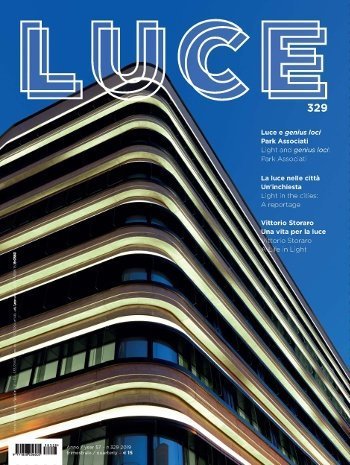 Winner of three Academy Awards for Best Cinematography (Apocalypse Now, Reds, and The Last Emperor) and countless other prizes, over more than fifty years Vittorio Storaro has worked with directors such as Bernardo Bertolucci, Francis Ford Coppola, Warren Beatty, Carlos Saura, and Woody Allen. The Master talks about it in a long interview, in which memories, anecdotes, movies, directors, actors, and places flow in a sequence shot in which his light is the great protagonist.

Urban lighting has been hit by the digital revolution. In this evolving scenario, we asked lighting designers, manufacturers, and managers about the current situation and the future of a light that is increasingly intelligent and interactive. The answers of Giulio Ceppi, Enrica Corzani, Alessandra Paruzzo, Margherita Süss, and Bianca Tresoldi. Mattia Sica, director of Utilitalia’s Energy Sector, will conclude this extensive report in the next issue of LUCE, with a “photograph” of the state of the art of sector and a scenario of its evolution.

MARIO BONOMO. A MASTER OF LIGHT AND IN LIGHT

To remember this great figure in the September issue of LUCE has been a common and heartfelt thought for many friends, academics, and lighting designers. Mario Bonomo has deeply marked the history of AIDI and Italian lighting, raising the meaning of Culture of Light to a precious and fundamental value.

In the novel Notes from Underground, published in 1864, the protagonist, says Alberto Moravia in his introduction to the Italian edition, “takes a lamp and goes down, from the apartment on the first floor where he lived till that moment, to the underground.” For the first time, Dostoevsky ruthlessly looks at himself and has the courage to analyse himself, and Moravia illuminates the darkest confessions of his soul.

THE OUTLOOK OF THE INTERNET OF LIGHTING
by Paola Bertoletti, Maurizio Rossi

Companies, designers and all the operators in the lighting sector are aware of the revolution that has occurred in the field of light sources and lighting fixtures over the last 10 years. From the electromechanical sector, lighting technology has gradually moved into the opto-electronic sector. If the light source revolution has already led to new products, a further revolution has begun: it concerns the entry of lighting in the pervasive telecommunications sector, the Internet of Things (IoT), in connection with the new Building Automation System (BAS). A new challenge that raises questions of cost, compatibility, control, scalability and consistency over time of the new lighting systems.

Soon, new EU Regulations will be published on the official gazette of the European Union, with which the European Commission will introduce, from 2021, new eco-design criteria and the new energy label with “rescaled” classes. The relevant Regulation for the lighting industry in terms of Ecodesign is the one approved on December 17th, 2018, which simplifies and offers all the elements of the Ecodesign legislation for products in the lighting industry, which have until now been the subject of the EC 244/2009, EC 245/2009 and 1194/2012/EU European Regulations, as well as of the following and respective amendments. The author explains us the highlights of the changes introduced by the two new EU Regulations.

In 2021 it will be necessary to choose between keeping solar time or daylight saving time (DST), also known as summer time, throughout the year. In fact, the current twice a year time shifts, setting the clocks one hour forward or backward, are not functional, both from a practical and organizational point of view, and for the psychophysiological stress produced, as widely documented by scientific research. The two authors/researchers have for some years been involved in studying the non-visual effects of light.

We discussed this with Stefania Kalogeropoulos, an architect with a major in lighting and exhibition design , and Alberto Saggia, a degree in Industrial Design with specialisation in lighting, founders of Anonima/Luci. An innovative kind of experimental research involving laser, sound, and electric tensions, carried on with an engineering and architectural approach, in which light alters one’s perception of space and draws emotional grids in which technology becomes the space of aesthetics.

INTERIOR LIGHTING. INTERVIEW WITH GIANNI FORCOLINI, THE AUTHOR OF THE VOLUME
by Federica Capoduri

Architect and designer, lecturer and researcher, well known and respected in the field of lighting design, Gianni Forcolini presents to LUCE his latest editorial project, published by Hoepli. The main reasons that motivate the publication of a new book on indoor lighting today? Radical changes have taken place in the world of lighting over the past decade, says the author. The books published before that period could not take into account an evolution that has affected both the industrial production and the set of tools necessary to design lighting systems.

MATTEO THUN: WE LIKE TO PLAY WITH THE LIGHT THAT THERE IS IN A PLACE
by Andrea Calatroni

There are traits that are recognizable in every designer, traits that make an object or architecture immediately identifiable even by a distracted observer. In the case of Matteo Thun, these are wood and light. Both are used as the primary elements of the story, as in the case of pen and paper for a writer.

DAVIDE GROPPI: THE SOURCE OF HIS POETICS IS AMAZEMENT
by Francesca Tagliabue

Davide Groppi is a character that escapes any kind of definition. Better yet, he sews definitions onto himself like a tailored suit. Groppi is not a designer, as his lamps are the result of an idea, not a project. He is not an entrepreneur who is valued solely for his products, but rather offers sensory experiences to whoever visits his shops. His creations are not registered in a catalogue but in a book. We chose to meet him and try to learn more about his world, eternally suspended between art and pragmatism.

PARK ASSOCIATI. EVERY TIME, SOMETHING NEW HAPPENS
by Andrea Calatroni

Since almost 20 years, Milan is the capital of design and architecture, it is the stage for new languages and methods of urban connection. The interview with Filippo Pagliani and Michele Rossi from Park Associati, among the best interpreters of this contemporary approach, which is almost a-stylistic, yet strongly tied to the genius loci. Light, for them, always has a primary role in the design, to the point that it becomes an architectural intervention theme.

LIGHT AND ROCK: HOW THE WAY TO ILLUMINATE CONCERTS HAS CHANGED. INTERVIEW WITH GIOVANNI PINNA
by Marcello Filibeck

Since the beginning of the 2000s, concerts and tours have become very important for the careers of singers and bands, and companies are increasing their investments in the show’s production. To discover more about this massive production, the author met Giovanni Pinna, a lighting designer that has been working with Vasco Rossi for years. Besides talking about what does working with one of the most important singers in Italy means, he explains how his job has changed over time, what are the differences between our country and the rest of the world, and the importance of teamwork.

The light runs on the track, as if by magic: hence OZ, the invention conceived by Targetti . Ideated, designed, and developed, in its entirety, within the company, it summarizes its distinctive traits: “For ninety years our products have been an expression of innovation, research, and attention to detail,” says Cesare Coppedè, a marketing manager with a recent past as lighting designer, who introduced us to the new versatile and magnetic collection.

DEMÌ: A BUBBLE IN THE LIGHT
by Andrea Calatroni

Mirco Crosatto, the R&D manager of Linea Light Group, told us how Demì, a simple yet technologically complex luminous object, was born. “The idea was to create a suspension lamp that had a fairly big size and a strong visual impact. I started thinking about what the shape that responded to these characteristics could be, and I took inspiration from one of the most beautiful buildings in the world, the Pantheon in Rome.” Simple and very clear ideas: this is the philosophy shared by the designer and the company, both from the Veneto region and accustomed to pragmatic e goals.

“MAY YOU LIVE IN INTERESTING TIMES”
by Alberto Pasetti

A BIENNALE TO RETHINK REALITY
by Jacqueline ceresoli

Art can be a kind of guide for how to live and think in interesting times, besides carrying out a social function that includes promoting pleasure in the absolute sense and the critical thinking that can question one’s dogmas, one’s beliefs. Without light, Art does not belong to the dimension of sight, to the discovery of the shape, contrasts, and chiaroscuros; without light, Art belongs to other senses, to another cosmos of stimuli and emotions.
When art raises questions about the causes and effects of modernity, like in the 58th Biennale by American curator Ralph Rugoff, the message to humanity is to be responsibly aware of living complex transformations as they occur, which are not to be feared but to be understood.

The goal of every project of his is the construction of a message, which can be ethical, political or ironic; it doesn’t matter which, but it must never be missing. He firmly believes that the designer is like a bridge that connects the idea to the final message, a bridge made of shape, details, and function. One of his rules is that a good project finds breath and life only if each member of the team listens to and tries to understand the other’s vision.

Organized by the Rete di Imprese Luce in Veneto, the competition represents an important event for productive Veneto. Last year, in an article on luceweb, we wrote that it helps to anchor to the territory the tracks on which the lighting industry runs, through common objectives: shared experiences and skills, meaningful actions of the desire to create a network. With this fourth edition, which was attended by many young designers and a greater number of companies, the competition projects itself on a national and international scale. We talked about it with Giordana Arcesilai, Roberto Corradini, Carolina De Camillis, Riccardo Fibbi, and Antonella Venza. The opinions of Alberti Bassi and Alberto Sozza.

THE MANUFACTURERS SPEAK
by Pietro Mezzi

After the architects and the professionals, the lecturers and the lighting designers, it is the turn of the world of lighting manufacturing. That is to say, of those who think, design, and produce lighting systems and luminaires .
In this fourth and final tour on the subject of the education of the Italian lighting designers, LUCE presents the business point of view, interviewing some of the exponents of the industrial front, a fundamental piece of the system. The points of view of Giovanni Bonazzi, Dante Cariboni, Paolo Di Lecce, and Andrea Nava.

STAGE LIGHTING, THE FOCUS OF SCIENTIFIC INITIATIVES BETWEEN FRANCE AND ITALY
by Antonio Palermo

Last June, a study day was held in Lyon, an interesting discussion between theater and opera light designers, institutions in charge of training lighting designers, and the stage lighting industry. Next season will be the turn of Lille and Venice, with a double conference on the theme of the Lumière matière – or Light as a matter –, which will bring together researchers, artists, and light designers, among which Pasquale Mari, Christophe Forey, Fabrizio Crisafulli, and Gruppo Nanou.