Jean Michel Wilmotte is an architect, urban planner, designer, and a keen collector, with an infinite number of won competitions, completed projects, and open construction sites. We met him in his studio in Paris, on the occasion of the great retrospective dedicated to Gio Ponti, which he staged at the Musée des Arts Décoratifs.

Architect Wilmotte, Ponti’s exhibition at MAD opened its doors last October, and since the opening night has attracted an incredible number of visitors. It is perhaps one of the most important and successful exhibitions ever dedicated to the great Italian master. To deal with the staging, did you also embrace the need for lightness that was so dear to Gio Ponti?
First of all, the place, the museum of decorative arts, is a very difficult space. It has a large central nave and two very low side wings, so the guiding principle was to use the main body as a hold that would contain more than 500 pieces (including furniture, sculptures, furnishings, etc.), collecting his six decades long chronological production since 1925, and, laterally, to develop two other themes accessible through several openings.

In the first wing we find those that have been his collaborations, objects and different artistic expressions (Richard Ginori, Domus, glasses, drawings…), and in the last section, or the “period rooms” that put things into reality, scale installations of his finest houses. The project is very simple; ultimately, we show all his work and it is an educational exhibition. You cannot get out of it without having understood Ponti!

The large perforated wall that welcomes us as soon as we climb the imposing entrance staircase is a clear reference to the Cathedral of Taranto. Why this choice?
I absolutely wanted an echo of Taranto. I wanted to put the lacework of the cathedral of Taranto because I wanted something strong, something that people could discover, since many people do not know it.
I wanted a perforated frame through which the light could make its entry into the main hall. It is a writing that no other architect has ever reused since 1970, and I wanted it to be a mark of recognition.

Are you aware of the condition of the Taranto Cathedral today?
Yes, it is in a very bad state. But with my Foundation (Wilmotte Foundation, ed.) in Venice, Fondamenta dell’Abbazia, Cannaregio, we have an on-going exhibition in support of the cathedral called “Gio Ponti. Sacrée Lumière! Una cattedrale e quattro chiese. Fotografie di Luca Massari”, open until January 27th, whose theme is precisely the Cathedral of Taranto.

Having made a lot of exhibition designs, all in important museums and foundations around the world, do you think there is a big difference between the public and the private ones?
Let’s just say that in private museums, like the MAD in Paris, there is a little more independence, compared to the long bureaucratic forms of relations with the institutions that must be addressed in public projects.

How do you use artificial and natural light? How does your approach to the project change?
To answer this, I start by telling you that I value having a lot of space, because the more you have, the more light can enter. Space is inhabited by light, whether natural or artificial. And that’s why I put light sources near the openings looking on the outside, to find the point of liason between artificial and natural, so that the lights can blend smoothly and without interruption. In all my building sites, the lights are near the windows to create this union.

Which project do you think of as being successful in this liason?
Light can reveal something, create an atmosphere, or emphasize a material, and it can radically change the perception of a place. We can reveal and narrate everything with light. For example, for the Beijing institution of contemporary art, the Ullens Center Contemporary Art (UCCA), we created a system for which the transition from day to night is barely perceptible. When the external light becomes evanescent, artificial light takes over quietly so as not to affect and alter the visitor’s vision.

Has technology contributed to the development of your profession?
Lighting has evolved dramatically with the arrival of sophisticated technology, but I do not think that it is definitely better today than before. We do not have any “punctual” lights as we used to, but we are almost there. Instead, in terms of volumes, I am impressed with how much miniaturization of the light points in relation to their power the industrial revolution has brought about in recent years.

And as for the urban light what vision do you have? Do you have any project going on?
We were talking about the lighting of spaces, but we can very well speak about the light of a city, of a building and of urban light, which by the way is very important. With several municipalities I am working on a project for a street lighting installation at the centre of the streets, and no longer sideways through poles that often also disturb the inhabitants. It is a form of floating aerial lighting that will not create a visual obstacle, not even to the pedestrians.

If you were to define your work or denote your trademark, in two words, which ones would you choose?
I would absolutely say matter and light.

What can you tell me about the renovation of the Lutetia in Paris?
Our study wanted to remain faithful to the spirit and strength of the original 1910 project, bringing it back to its former glory. Improving the function of the hotel was one of the priorities. We have also designed twenty interior lights, which, also in this case, reflect the style of the building.

You have started the construction site for the new UN headquarters in Dakar, and for Doha you have participated in a competition for a huge coastal area where a new housing settlement will be created and that you will call La Corniche. What can you tell us about these projects?
The United Nations Headquarters for West Africa will bring together the 33 UN agencies of the region in Dakar. Our project takes the form of a waterwheel, with an auditorium in the centre, and with 7 or 8 branches that correspond to the UN departments, an eloquent symbol.
La Corniche, on the other hand, is a site in which magic and innovation are expressed together, a project that creates a bridge between place and time, a link between the arts. The poem of La Corniche is an urban calligraphy that is gathered throughout the central avenue, like pages moved by the wind. They are like bright letters carried by the wind and laid in a haphazard manner on the ground, on the water and on the structures.

You have developed projects in many parts of the world, what other culture do you feel close to yours?
Well, definitely the Italian culture, like in general the Latin one. Italy, a descendant of Ancient Greece, always gets my attention and my curiosity. I started going to Italy for my early projects, beginning from Carrara to choose the marble, and since then I have never stopped!

So that’s also why you took care of the extension of the Ferrari headquarters in Maranello?
In a way, yes! High technology and tradition are the strength of this company, and for the new Ferrari building we have chosen transparency, brightness and lightness for the spaces, using its colours: Ferrari red, white, and grey. 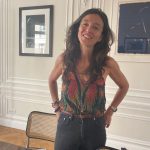